Mile 101 Checkpoint of the Yukon Quest 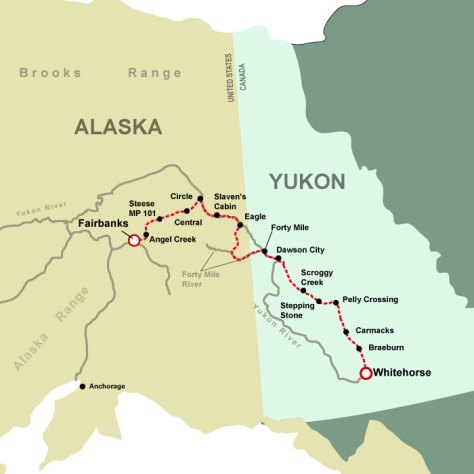 The Yukon Quest is one of our two 1000 mile dog sled races.  The trail is between Fairbanks, AK and Whitehorse, Yukon Territory, Canada.  The start alternates every year with even years starting in Fairbanks.  It’s tagged as the Toughest Race on Earth.

The Yukon Quest International Sled Dog Race gets its name from the “highway of the north,” the Yukon River, and historic winter land routes followed by prospectors, adventurers and later mail and supply carriers traveling between the gold fields of the Klondike and those in the Alaska interior.

I was lucky enough to get to work at Mile 101 checkpoint as a cook.  Best time I ever had working my ass off.

On race day, Jan, Simone, and I went into town early to walk around the dog yard and see the mushers getting ready.   Since Jan is a photographer and had gotten a media pass, we were able to stay inside the start shoot to take pictures.

After the start Jan and I headed out to Mile 101 Checkpoint were we were volunteering for the next few days.  It is 101 miles up the Steese Highway.  This is the first year that 101 was an actual checkpoint.  Normally it is a dog drop.  Mushers had a mandatory 2 hour layover so had their drop bags available to them.  This is the first year that no one returned from their attempt at Eagle Summit to scratch.  Here is the sunset we were gifted with that night as we prepared to be invaded.

We also were treated to a special dinner by Eric.  Shrimp, potatoes, corn, sausages, man what a feast.  We were also able to use some of the shrimp for others who came down the trail later. 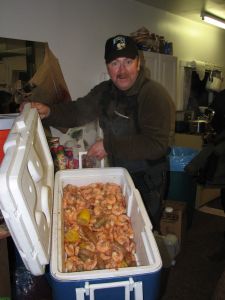 Then we went out to the truck to take a nap.  At midnight we came back in. Unfortunately, I left my camera in the truck and didn’t have a minute to spare once the mushers started coming in  to go out and get it.  When Brent came in though, I made the time hahaha.  That’s why it’s a bit foggy. 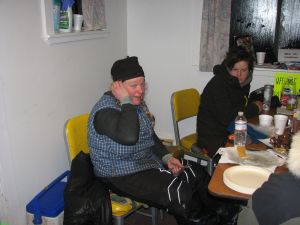 Abbie West: Hit some overflow, “Olympic sized swimming pool”.  It was fun getting to watch her being interviewed by some media team. 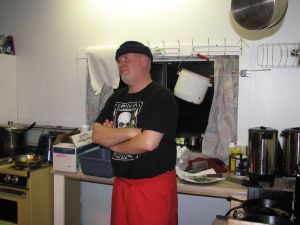 Rainer, cook extraordinaire!  We were cooking bacon, eggs, and halibut all night and all day.  We also had a tasty stew on the burner.

If you look at the times that the mushers were coming in, you can see we really were cooking all night.

Jan was working out in the dog yard helping to get the teams parked and bringing their drop bags and straw to them.

The rare break, sit down while you can.

Joachim Rinsten, of Germany, is one of a group of people who walk the 420-mile route of the Arctic Ultra Run every other year. The walk follows the Quest trail from Whitehorse to Dawson City, and it doesn’t occur when the Quest runs from Fairbanks because the walkers and dog teams run into each other.

Rinsten’s birthday walk will last four to five weeks. He was on day six when he arrived at the Quest checkpoint at Steese Highway Mile 101 on Sunday morning.

Speaking through a translator, [Rainer] Rinsten said he loves the adventure of the area and the challenge of the walk.

Rinsten arrived at Mile 101 as many Quest mushers were still serving their mandatory two-hour layover there. He was dragging a sled full of supplies, including all the food he expects to need, survival gear and a bivouac sleeping sack.

For drinking water, he fills a Camelbak with snow and lets his body heat melt it.

Burn barrel?  We don’t need no stinkin burn barrel!  Burning off the hay which is used by the mushers and raked up by the handlers after they leave. 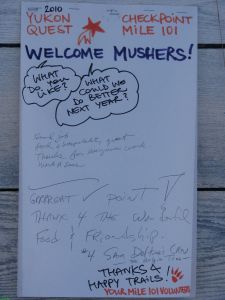 Good job, food and hospitality great.  Thanks for everyone’s work.

Great checkpoint.  Thanks for the wonderful food and friendship.

It was fun getting to know some of the handlers as they waited around for their mushers to come in.

After 3 days and less then 6 hours of sleep we made the drive home.  After sleeping the rest of the night, I got up and took a soaking hot bath, then went back to sleep for 6 more hours.  After finishing up with a full sleep last night, I think I am caught up.  It was great fun.  We had a great crew.  Thanks to Peter Kamper, our checkpoint manager, Jan, Rainer, Jessie, Brad, Katrin, Lucas, Mike, and a few others I am sure I am leaving out.  Hope to get to do this again next year.

Opportunity is missed by most people because it is dressed in overalls and looks like work.” – Thomas A. Edison