Last year we had the spring that never sprung.  It was cold and wet and nasty until finally, summer was here…then gone.  Our warmth passes so quickly.  I love winter, obviously, or I wouldn’t be able to live here.  But when it starts to warm up, it’s such a time of excitement and expectation.  It’s almost heartbreaking when it doesn’t happen as it is supposed to such as last year.  This year, it seems like Mother Nature is apologizing for last year as we are already in breakup.  The snow is melting, the sun is out, life is good!

I know it’s been a long while since I posted anything.  Mostly I have been hibernating so there’s been little of interest to write about.  I’ll try to catch you up with a few pictures.

Christmas came and went fairly quietly except for the kids got their first guns.  They are just little .22s.

Of course, there was always nights of chasing the auroras.

One of my aurora photos was used on a Denver station news program.  I was pretty excited.

We did a bit of entertaining and a lot of cooking.

I also taught her how to make home made chicken noodle soup, with home made noodles.

Worked at Checkpoint Mile 101 for the Yukon Quest again.  This was my 5th year working there.  Needless to say, I love it.  I ended up staying an extra night and day after everyone left, just putting wood in the stove and playing my fiddle.  I’m going to plan on doing this every year as it was so peaceful and restful after all the commotion and lack of sleep that working there during the Quest brings.  I didn’t write about it this year but you can look back over the years in this blog to see some stories if you care to.

I did take some video of the two passes I have to cross coming home from the checkpoint.  The roads were actually very good even though in the videos, you can see they were icy.  Last year three of our members got stuck or left the road while trying to get out to the checkpoint.

Did a bit of henna here and there.

I love doing bellies the most!

Of course, winter is a time to go visit friends, hang out, have fun, drink some beer, etc.

While Olivia was working on her roller derby skills.

I got to hang out with pretty mushers in tuxs for the Bunny Boots and Bids fundraiser and Wine Tasting.

And of course, practiced and played my fiddle.

I don’t think I posted this video yet.  It’s how I have to unfreeze the drain.  Living in a dry cabin, having to haul all our water, makes us really conserve.  Of course, if you are only using tiny bits of water here and there through out the day, and it’s -40 outside, the water freezes before it clears the drain.  We have a grey water system which means that the water just goes straight from the kitchen sink to the gravel pad that the cabin sits on.  I have had to do this a couple of times each winter.  It’s not really a big deal but yea, at that cold of temperatures, one’s lungs do not want to inhales so you end up breathing very noisily as you can hear in this video lol.

So, onto the upcoming summer!  I have a camping, float trip down the Delta Clearwater planned for the kids and I.  I have a trip up to visit my friend Susan in Kavik River Camp planned for later in the summer.  I have a zipline adventure trip down near Talkeetna planned with my friend Lori.  And I want to take my kids back packing in the back country for the first time.  I have taken them camping lots of times but never into the back country.  There be bears out there you know.  Backpacking has almost always been my special solo adventures.  I keep them for myself.  But maybe my kids would like them for themselves as well.  Of course, you can’t forget my annual Fowl Adventure.  Chickenstock Music Festival then a visit to my friends’ Wayne and Scarlett who live off the Yukon River.  Can’t wait to see them!

Until next time my dearies.  I’ll be here.

Yes my dear readers, I know it is now half way through My Favorite Month of March, but I have either not been inspired to write or when I was, life has just been too busy.  So onward we go and I’ll try to catch you up.

After a bitterly cold January, February actually wasn’t that bad.  The -40 and colder at my house made me long for my cozy little waterless cabin.  It did get to -50 but then my temperature gauge broke so I don’t know exactly just HOW cold it got.  Being on the river means that we are often colder than the surrounding hills due to inversion.  Trying to keep water and septic fluid in those temperatures is exhausting, and expensive.  I’m still paying on my electric bill as are many in the area.  Heat traces on water lines still don’t keep the water pumps themselves or even the septic lift pump from freezing.  This is my 9th winter here in the magic land and by far my most difficult in many aspects.  It’s ok though.  Not once did I ever consider moving to warmer climes.  I am still in love with the Interior and awed at our extremes.

As always, working on the Yukon Quest was one of the highlights of my winter.  So here are some pictures from that.

While I didn’t have a flat in a blizzard like last year, my tires were very much on my mind.  I was very thankful for the studded snow tires my friends Jan and Eric helped me get as I journeyed 100 miles up the Steese Highway. 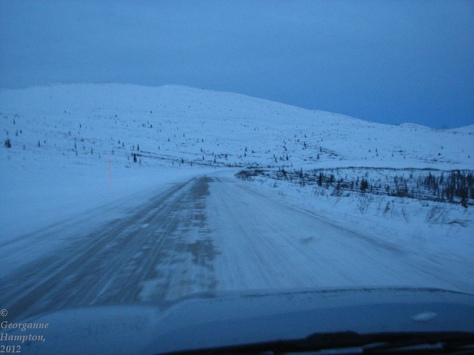 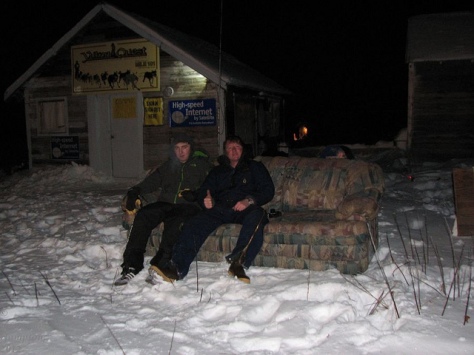 Checkpoint Manager Peter Kamper and his son Lucas who kept the fires burning in all the cabins. 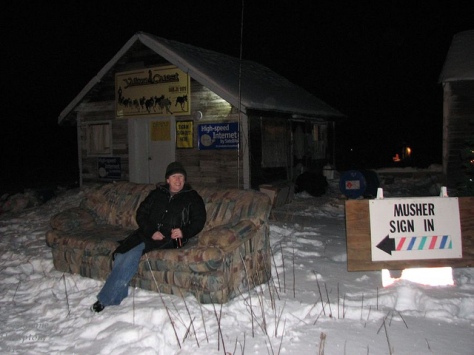 This is the couch that is normally in the cook shack.  They took it out to give us more room and it made a nice conversation piece as well as a place for the checkers to sit.  The checkers spend long hours waiting for mushers to come into the check point and to check them out before they leave. 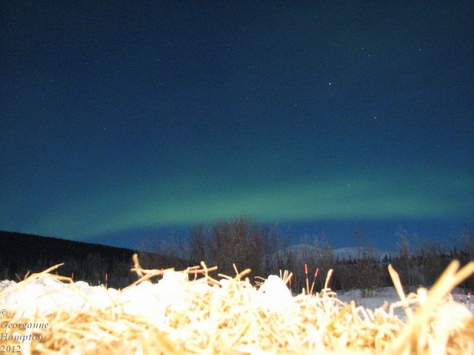 We did get a very nice aurora show.  I didn’t bring my tripod so here is a picture from my camera sitting on a bale of straw.

Checkers waiting for mushers to come in. 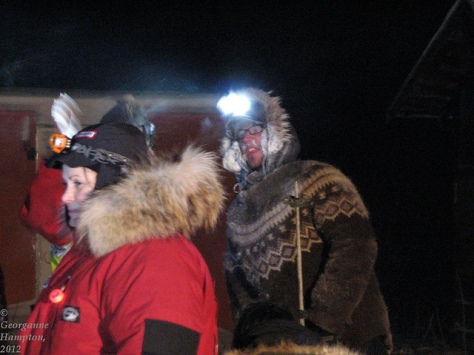 I know most of the mushers running the Quest but some of the rookies I still do not know.  Sometimes it is difficult to tell who is the musher and who are the handlers. This year all that one needed to do was look at their boots.  If their boots were covered over in frozen ice, they were a musher. 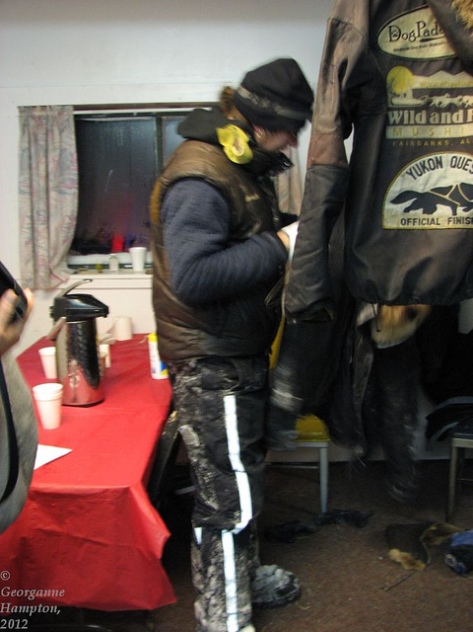 Brent Sass of Wild and Free Mushing. Brent is known for being a pretty cheerful guy.  Even tired, this guy is happy.  He’s just one of those people who is fun to have in the cookshack.

Allen Moore of Skunk’s Place Kennel, being interviewed by the media.  I don’t know him well but he seems to be a really nice guy.  He’s married to Aliy Zirkle who is the only women so far to win the Yukon Quest.  She also just got second place in the Iditarod. 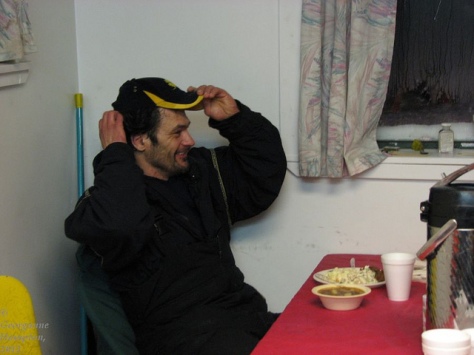 Lance Mackey cutting off the frozen bottom portion of his pants. 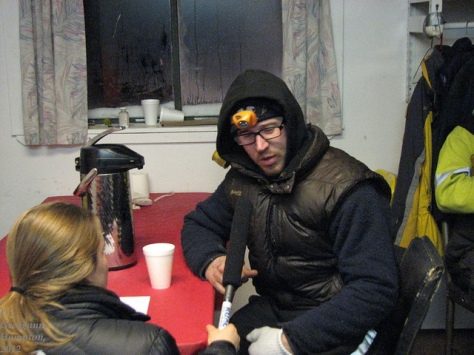 Sonny Lindner, who I must admit I do not know much about.

Sue Ellis, wife to Mike Ellis who ran the Quest.  They have Team Tsuga Racing Siberians.  Sue’s just about the nicest person I’ve ever met at the checkpoint.

Is this a future leader that came to visit?  We’ll see.  It sure was nice to have some puppy love.

We had some amazing sunsets and sunrises. 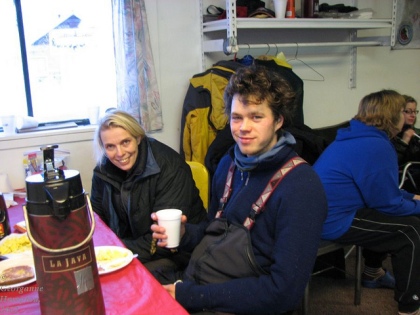 Norweigian Joar Leifseth Ulsom, what a cutie!  He was racing for Team Racing Beringia, a distance learning program.

The always awesome Sebastian Schnuelle, of Blue Kennels.  He was not racing this year.  Instead, he was the “Armchair Musher on the Trail” for both the Quest and the Iditarod.

Race Manager for the Beringia Team.  Yea, sleep is hard to come by, especially with 3 teams. 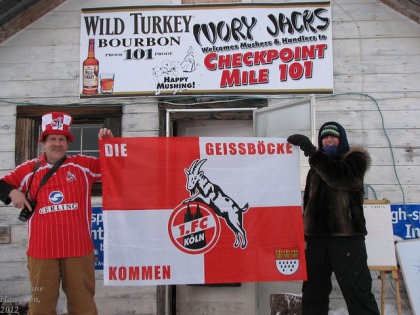 My German friend Sui and his “Goat Team”. 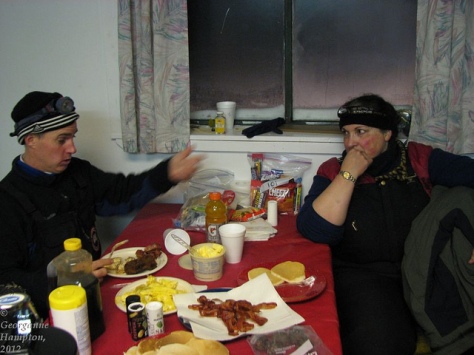 Jimmy Lebling and my friend Jan Denapoli-Cosmuto.  Jimmy was running Jan’s dogs in the Yukon Quest 300. 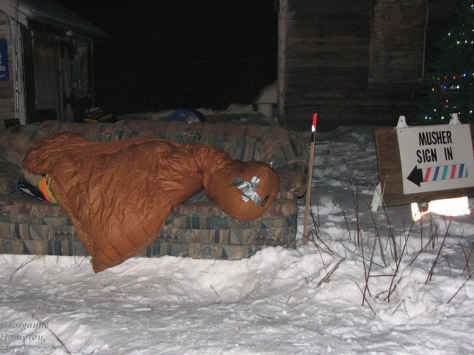 Did I mention that our checkers are the most dedicated people! 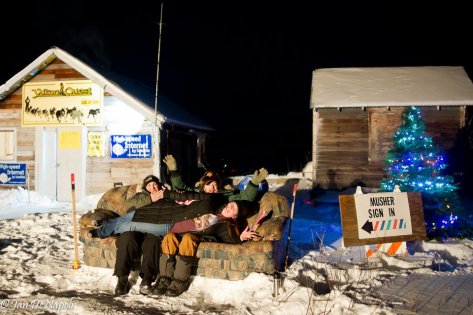 All in all it was a very nice race.  The mushers had a lot less heartbreak and difficulties from the area this year.  That makes me happy.

Now on to the rest of the month.  We have been having awesome magnetic storms producing some magnificent aurora shows.   Unfortunately I have been missing most of them since taking myself off of Facebook and having access to the Aurora Notifications page.  But I still am able to track them on our Geophysical Institute Page. 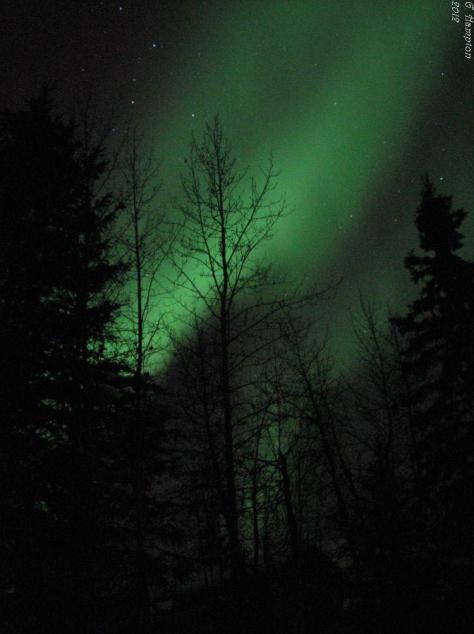 Jan, Eric, and I, along with my daughter Olivia and another friend set up an arctic oven tent out on one of the ponds we normally drive dog teams to.  Wow that was an awkward sentence.  I was using one of Jan’s cameras because she has a wide-angle lens.  Well of course, most of my shots did not turn out as well as I would have liked but here is one so you can see the setting. 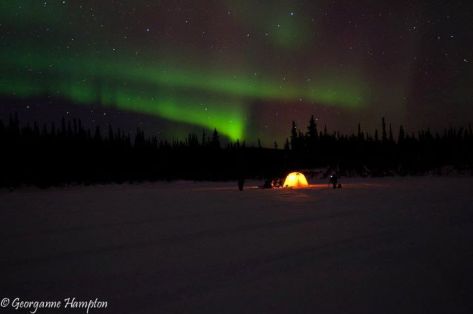 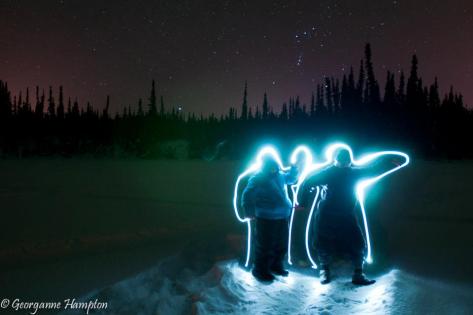 We had fun playing with light drawing while waiting for more auroras to show up.  This is Olivia and I, walking like Egyptians. 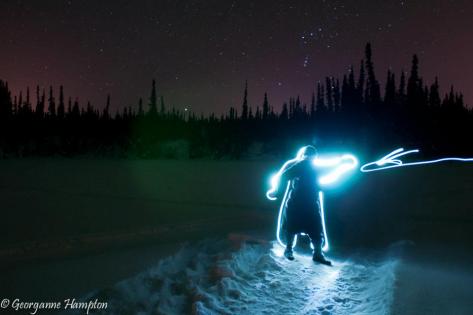 Me throwing a lightning bolt.  Ok ok, I know Batman doesn’t normally have lightning bolts at his disposal but I’m assuming Alfred came up with a contraption to harness all the electromagnetics in the air.

Home made chicken noodle soup has been a favorite this winter.

Ever wonder what cabin fever looks like?  Well, this pretty much sums it up.  Yes, we are crazy in Alaska.  What would you expect to happen with a swimsuit, feather boa, and fur boots at -45.  And with that, I am going on a diet.  Last year I cut out Cokes from my diet and lost 20 lbs.  I ran all winter long, some weeks every day but at least 3 days a week.  I didn’t lose any more than that first 20 lbs.  So now, I will diet.  I’m not a “dieter”.  But then again, I was never a runner before either and thoroughly enjoyed that.  I refuse to end up a fat old lady!