As some of you know, I get to work at Mile 101 Checkpoint for the Yukon Quest (Toughest Race on Earth).  This is our 1000  mile sled dog race.  Here is the post I made about it this year. Our crew got along so well that we decided to get together back at Mile 101 for a 4th of July outing as well as to get some work done that is much easier to do in the summer instead of the winter.

I rode up with Jan and Eric.  Jan’s truck and 4 wheeler and Eric’s 6 wheeler.

This is the main/cook shack.  There are other cabins used by the mushers for sleeping and one communications cabin.

One of the lower sleeping cabins.  I really like this shot.

We worked to increase the dog yard.  Then had a bit of a snack. 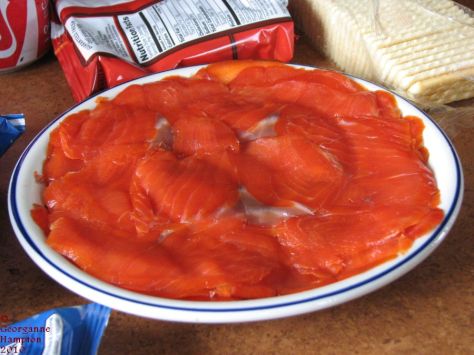 Peter brought some lox that he had made.  I’d never had it before but tried it.  It was pretty good.  The texture would tend to keep me from really enjoying it.  It’s not slimy but is very smooth.  It had a very good flavor though.

Lox is salmon fillet that has been cured. In its most popular form, it is thinly sliced—less than 5 millimetres (0.20 in) in thickness—and, typically, served on a bagel, often with cream cheese and capers. Noted for its importance in Ashkenazic Jewish cuisine, the food and its name were introduced to the United States through Eastern European Jewish immigrants.[1][2] The term lox derives from Lachs in German and לאַקס (laks) in Yiddish,[3] meaning “salmon”. It is a cognate of Icelandic and Swedish lax, Danish and Norwegian laks, and Old English læx.

Sometimes called regular or belly lox, lox is traditionally made by brining in a solution of water or oil, salt, sugars and spices (the brine). Although the term lox is sometimes applied to smoked salmon, they are different products.[1][2]

Katrin, also from Germany enjoying the lox on bread with cream cheese.

Sterling, one of our communications guys and Peter, our checkpoint manager burying conduit for electrical line so we only have to have one generator running.  We used so much fuel on the generators last year.  So now the cook shack and the comm shack are connected! 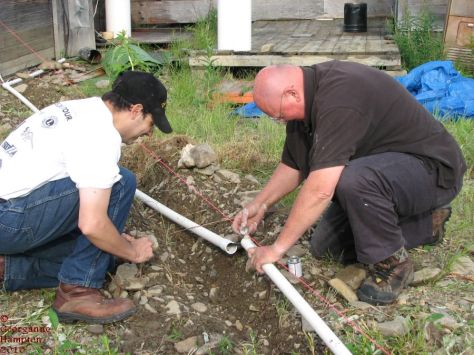 Kevin and Sterling, the Communication Team. 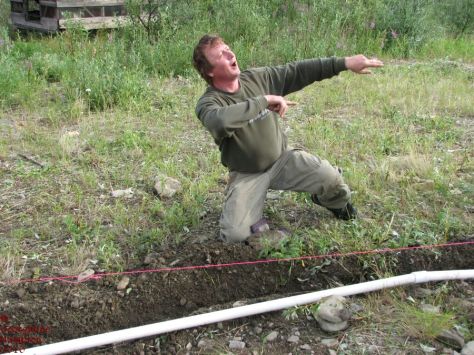 Eric did the cooking.  Dinner was fried halibut and ling cod, grilled corn on the cob and bannock.

We also did a lot of cleaning up while there.  We cleaned when we left after the Quest of course but someone had been using the place sometime in the interim.  Plus, it’s not like it is tight, dirt and dust blow in and gets tracked in. 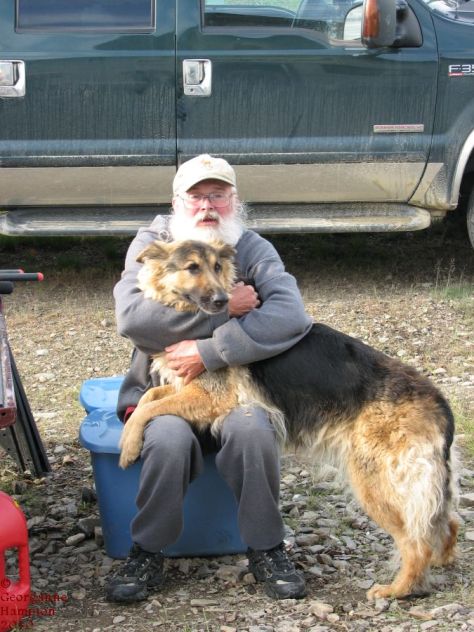 Mike and Precious (and she really was too.)

Eric took us on a ride to see the actual Yukon Quest “trail”.  We really couldn’t tell there was a trail here so good thing Eric knows where it is since he puts it in every year for this leg. 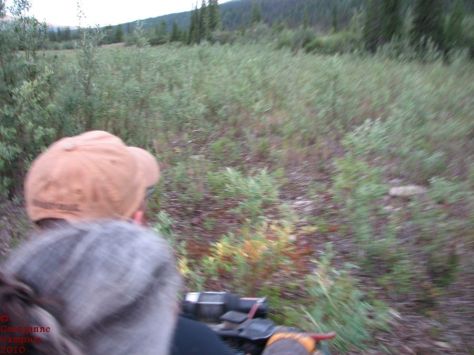 Eric drove his 6 wheeler, Jan rode behind him.  Katrin and I rode in the back sitting on coolers.  Peter and his son Lucas drove the 4 wheeler behind us.

Yes, we went through that.  Katrin and I deemed this “extreme 4 wheeling”. 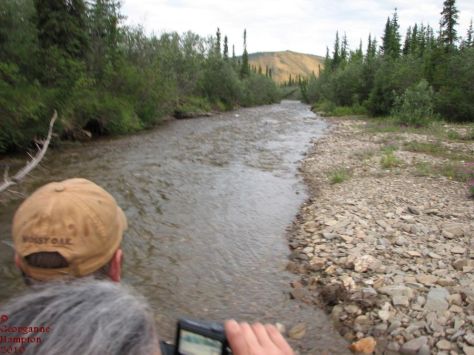 We went up this creek for over a mile.  There was nowhere to get off the river.

Then we went on the road up to the Eagle Summit pullout.  While that was easier, it was also cold. 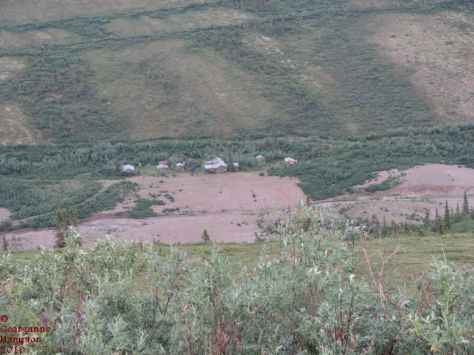 From the road looking down in the valley.  The checkpoint is to the right several miles.  The trail goes in front of this old lodge and continues on up over Eagle Summit, one of the most challenging parts of the Yukon Quest Trail. 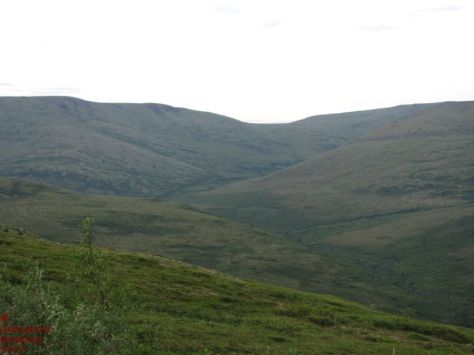 The trail goes up and over that saddle.  You really can’t tell from this picture, how steep it is. 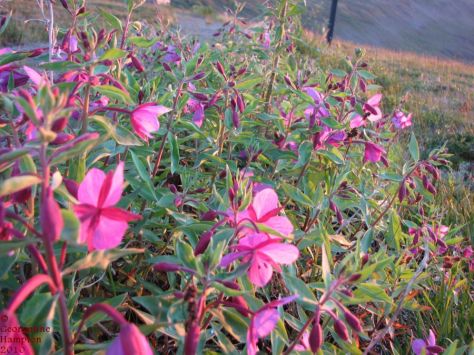 Eagle Summit is a 3,652 feet (1,113 m)-tall gap through the White Mountains of central Alaska.[1] Its high-latitude location means that it is one of a handful of places on Earth where the sun can be seen at midnight by an observer standing south of the Arctic Circle and north of the Antarctic Circle.[2] The gap was named after the nearby Eagle River by prospectors from nearby Circle, Alaska.[1]

Eagle Summit is the site of a convergence zone between the Yukon Flats to the north and the low ground of the Tanana Valley to the south. Any differential in the weather within the two valleys causes high winds and precipitation when there is moisture in the atmosphere.[3] In 1916, Hudson Stuck, who was one of the first people to climb Mount McKinley’s South Peak, wrote, “The Eagle Summit is one of the most difficult summits in Alaska. The wind blows so fiercely that sometimes for days together its passage is almost impossible. … The snow smothers up everything on the lee side of the hill, and the end of every storm presents a new surface and an altered route. … there is no easier pass and no way around.”[4]

It was for this latter reason that engineers chose Eagle Summit as the route to build the Steese Highway, which connects Fairbanks, Alaska to the Yukon River at Circle. In 1927, just 11 years after Stuck became one of the first Americans to navigate Eagle Summit on dog sled, the highway was completed and road travel over the summit became possible. Today, Eagle Summit still is the highest point on the highway and tourism guides recommend its scenic views.[5]

The trail of the annual Yukon Quest 1,000-mile sled dog race also passes over Eagle Summit.[6] The area’s high winds, drifting snow, and steep terrain make it the most difficult section of trail in the race, and some competitors have called it the most difficult section of trail in any sled dog race in the world.[7] In 2006, a fierce storm atop Eagle Summit caused whiteout conditions that forced seven mushers and dog teams to be evacuated via helicopter from the mountain. Partially because of the storm, only 11 mushers finished the race — the fewest in Yukon Quest history.[8]

Keep in mind, Fairbanks is only at 436 feet above sea level. 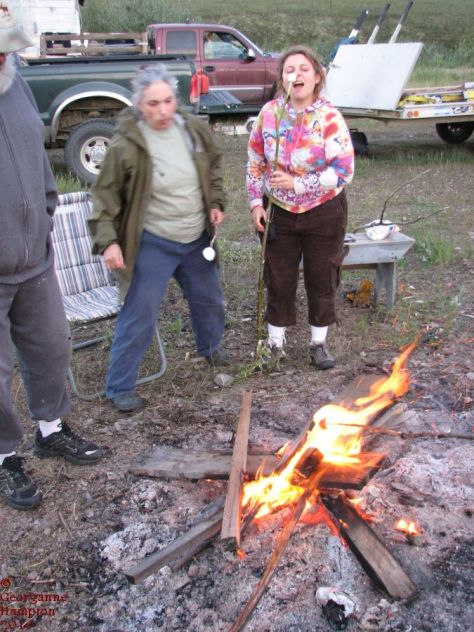 After our adventures, we came back to camp to have smores.

I took this standing right by the fire.  It was a nice night.

The following day, Eric climbed up to fix the roof that had been leaking around the stove-pipe. 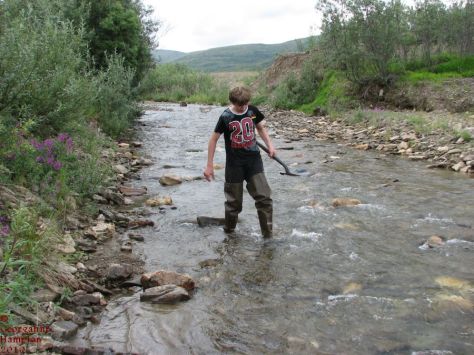 Lucan and I went down to the creek for some gold panning.

We got a lot done.  Good work, good friends, good conversations.  It was a fun long weekend.